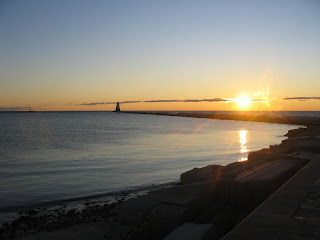 So, the first picture is of Bryan putting the car seat in our new car. It actually was easier than what I thought and only took about 30 minutes. Partially just bc I was paranoid about it not being ‘tight enough’ that I kept making Bryan play with the straps. Then the little signal that’s suppose to let you know if it’s on the right incline isn’t the easiest to read. Any little movement can change it from ‘correct’ to ‘uneven’ and vice-versa so we played with that for awhile too before deciding since the first time it said ‘correct’ it really was. I still will probably take the car seat to the police station and have them check it to make me feel better (paranoia here I come) but at least it’s in 🙂 – Nope no baby yet.

I’ve been reading this amazing book called ‘Heaven’ by Randy Alcorn. He is one of my favorite novel writers and has such an incredible and Biblical persepective when it comes to life and eternity. I am always challenged, convicted, and encouraged when I read his stuff. Not to mention that the stories are good. But, in my opinion he has the most Biblical perspective on heaven and hell that I have ever read or heard!

In his opinion most Christians today spend very little time thinking of heaven or hell bc we think heaven will be somewhat boring (to be honest) and hell, well, not bad enough to really mention to people. After all, isn’t heaven some spiritual realm where we’ll sit on clouds (if we can sit) and just listen to sermons or sing hymns/praise songs all day for all eternity. We won’t know anyone, we’ll have forgotten all about the earth, there won’t be any animals, trees, nature, doing, learning, we’ll just basically listen and sing for all eternity. Woohoo :[ As for hell, well, it’s going to be bad, but how bad is bad? Not to mention that the Bible says “we can’t know what’s in store for us” so, how easy is it get excited about something we can’t even comprehend and doesn’t seem real anyways?

Well, according to Scripture – heaven will be the adventure of a ‘lifetime’ that will never end. And although the verse does day “…No eye has seen, no ear has heard, no mind has concieved what God has prepared for those who love Him, BUT God has Revealed it to US by His Spirit…” (2 Cor 2:9-10) Maybe we can begin to know or at least guess certain things about our eternal home…. Maybe the Bible actually reveals so much more about heaven and hell then we ever thought – enough to make it sound “like heaven…” (no pun intended)