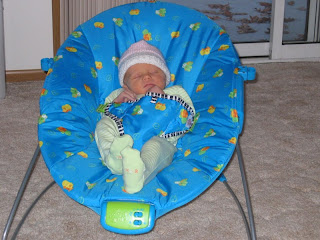 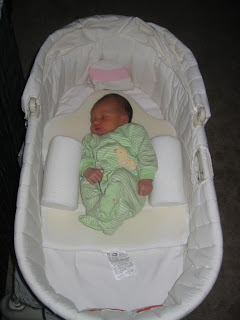 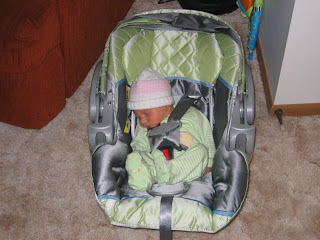 And you all thought I was kidding when I called her the “Little One” for the past few months! When we left the hospital yesterday she was done to 6lbs 3ozs. She definitely is our “precious Little One.”

I know the hat doesn’t go with the outfit but it was the hat she wore in the hospital and we’ve just continued to use it. Her outfits are slightly big on her at the moment which makes her so stinkin’ cute! But I know this won’t last long and she’ll grow quickly so I’m trying to really enjoy her ‘little-ness.’

Labor- what to say. A kidney stone really is harder I think, but labor, man, there is no other way to describe it then LABOR. Bry and I went in Wednesday at 4pm. They started the “Cervidel” (SP?) at 5 to soften my cervix more and dilate me more. The cramping started that night. BC I was being induced I was attached to a fetal monitor and a contractions monitor, not to mention the IV and a wonderful machine that took my blood pressure every 1/2 hr for awhile then every hr. And I was basically stuck in bed from 5 on bc of the Cervidel being inside. Thankfully my parents and Bryan’s parents came to hang out with us for a few hours so that made the night pass by quickly, but once they left was it slow! The OB nursing staff was WONDERFUL and Bryan was able to spend the night. Unfortunately it’s a typical hospital and with the monitors, the noise, me having to go to the bathroom every couple of hours and take the IV and a few other plugs with me, and getting checked on throughout the night we both got maybe 2-3 hrs of sleep.

At 5 am Bryan went home to take a shower and they began to prep me for the Pitocin. They started that at around 6am. Bryan showed up then as well. My mom showed up at 7:30 and spent the rest of the day there with us. My dad came for a little while in the morning and then came back in the afternoon and stayed through the end. Bryan’s parents were able to show up just as Rina was being born.

The Pitocin didn’t seem to do much to be honest. The real contractions began once they broke my water at 8:45am. The Dr. came in, saw me laughing and talking and said “well, we’ll put and end to that real quick” as he sat down to break my water. And he wasn’t kidding either!

I started out at 2cm when he broke the water. At 11am I was dilated 3-4cm. At 12:30 I was up to 5cm and at 1pm I jumped to a 6. They stopped upping the Pitocin once the Dr. broke my water bc my body took over and sped the process up on its own. At 2pm I was at an 8 and by 2:30 I was at a 10 and they said “ok push!” and believe me, those really are the two most amazing words you can ever hear! I had wanted to start pushing around 6cm bc Rina was stationed low. That was probably the hardest – wanting so badly to push and not being able to. I was trying to stay calm through the contractions but I had to literally squeeze my legs together for awhile to stop myself from pushing and it’s hard to stay calm when you’re squeezing tightly!

I pushed for about 40 minutes or so. Apparently my pelvis is a little small so poor Rina kept getting caught on it. Her little head would come out start to crown and then slip back under. That was incredibly frustrating! I had to have and Episiotomy (SP?) as well but that was easy! Either way, once the head was slightly out Rina came out in 2 pushes. It was love at first sight for Bryan and I.

I only took 1 dose of Stahdol (SP?) from 1-2pm to take the edge of the contractions while dilating from 6-8. And Bryan was amazing! He was an incredible coach and I can not imagine getting through that again without him.