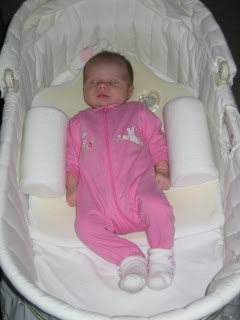 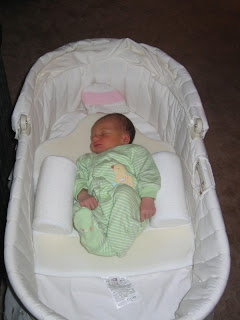 My little one is growing up! The first picture is Rina at 1 month and the second is her when we first brought her home. Quite the change in 1 month already isn’t there!

Rina had her 1 month checkup yesterday. Almost 3 weeks ago she weighed 6.13 and was 20.5 ins long. Well, yesterday she weighed 8.13 and was 22 ins long!!! My little piggy 🙂 (to think in the beginning I was worried at times if she was eating enough) Everything looks healthy – praise the Lord. We figure she’ll be out of her Newborn clothes and diapers by the end of the week. I’m glad she’s healthy and growing but it’s hard even at this point to see my little girl get bigger. She still looks like a peanut, though, when you see her.

She is in the 5oth percentile for weight and 75th for height. Quite a change from the 10-20th percentile she was at while in the womb 🙂 To be honest, I’m thankful this growth spurt occured outside me not inside. I look at her now and I can’t imagine pushing her out! I don’t know how women do it, but I know they do 🙂 (my sister and sister-in-law included)
——————————-

The first two years of our marriage we started a tradition that I’m afraid we have not followed through these past two Christmases. In December we would go and see the Transiberian Orchestra in Grand Rapids. I LOVE them! If you haven’t heard them you should definitely check them out. Just Google their name (no, I’m not smart enough to put in a link 🙂 ). They’re a cross between classical and rock. In concert they add 80’s elements and pyrotechnics to their style as well which is quite the show. Each cd they make is a story with the music following the plot line, which sometimes is quite small granted. Most of their cds are Christmas music but one is about Beethoven and the night before he died. Gorgeous music and so much fun to listen to!

Well, I love their music but I only have 3 cds. Yes, lately I’ve been cheap-o-la with money. The other day Bryan went out to run some errands and decided to buy me another cd just bc. Awwww, how sweet 🙂 But it did remind me that it’s time for their concert in GR and we’re not going again. Too hard with Rina and it’s a bit expensive for tickets to be honest. Maybe one day. Anyways, if you haven’t heard them I HIGHLY recommend them, especially at Christmas.

There are 1 month pictures of Rina on her website!!