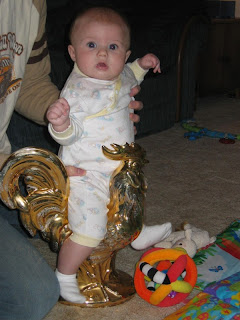 Every family has inside jokes. For the Nelson family – this is one of them. A rooster painted to look golden. You can tell the size by it’s comparison to Rina. She’s now officially a little over 15lbs and is 26ins long. Yep, it’s a big rooster, and a little heavy too. (with Rina’s belly she almost couldn’t fit on the rooster 🙂 )

I’m not sure what the real story is. The one we were always told as kids growing up was that my grandpa Nelson (my dad’s dad) who is also a physician was given this rooster instead of payment by one of his patients. For many long and happy years Mr. Rooster resided in my grandparents house. We grandkids were happy to visit and leave him there.

Five years ago my grandma Nelson passed away. My grandpa decided to sell their house and get rid of most of their stuff. The whole family gathered in Detroit to help pack up the house and say one final goodbye to it. There was much discussion over who would take (actually get stuck with) Mr. Rooster as my grandpa didn’t want to see it get thrown away (not sure why).

One of my uncles slipped the rooster in my parent’s van just before we left and the tradition began. The rooster has now flown on airplanes and traveled by car to the vast regions of Alaska, Florida, Oklahoma, and has been around Mi several times. Mr. Rooster currently resides with my cousin and her husband in Chelsea Mi. I hope he will be happy there and make for a nice long stay 🙂