Why a Jewish Rabbi 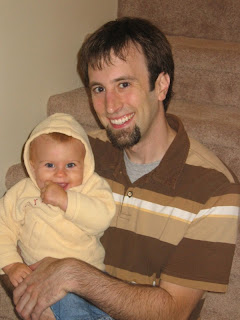 They’re both too stinkin’ cute 🙂 There’s just nothing else to say. Except that this weekend we are leaving to drive to CT to stay with Bry’s brother and his family for the week. We can’t wait to see them!!! Oh, so there may not be a new post next Tuesday 🙂 But after that we’ll have pics of our trip and the cousins.
—————————–
Why would Jesus come as a Jewish Rabbi? Have you ever thought about it before. The Sovereign of the Universe, Creator of everything, He can come as anything He wants and at anytime He wants. Why 1st century in the land of Israel as a Jewish Rabbi? This time we’ll only focus on the Jewish rabbi aspect 🙂 It is actually quite amazing the way God set up the world scene to prepare for the arrival of His Son but we’ll save that for later…

1st century AD in Israel saw an amazing Jewish culture steeped in Biblical studies. Honestly, their layman’s knowledge of the Scripture would make our Theologians look like children (I’m not exaggerating). Whenever Jews gathered together at least some would begin to engage in a Biblical discussion. Anytime, anywhere, at a party, a funeral, a wedding…. Their hunger and thirst to know and understand God’s Torah was limitless. And for good reason. They had already witnessed the expulsion of their ancestors from the land bc of their ignorance of God’s standard and refusal to adhere to His Word. They did not want to make the same mistake twice.

Not to mention that the Torah to them was life. This was the very Word of God and they were the ones blessed to have received it. Wasn’t it fitting to spend most of the time focusing on it, learning it, studying it, memorizing it, digging its depths to understand what was hidden there? Even women were encouraged to engage in Biblical studies. Remember Mary’s praise to God after arriving at Elizabeth’s house – nothing but Scripture passages woven together. And Mary probably wasn’t abnormal in her ability to do that, she was probably all too normal. Without concordances, dictionaries, or Biblegateway.com the Jewish teachers could tell you the specific verses in which a certain word occurred and what it’s uses were in each verse- from memory.

Jewish Teachers at this time were common, traveling from town to town expounding on the Torah and wherever they went the Jews drank in their words, desiring to better understand their Scriptures. A culture steeped in Biblical studies – I can understand why Jesus chose that one in which to live 🙂

The All Stars of their day were not the celebrities who could act or the athletes who could play a game well but the Teachers of the Scriptures. And so well did these people know their Bible that one had only to open his/her mouth and within a minute or two the listeners would know if the teacher was a fool (I got this picture from David Bivin of Jerusalem Perspective). The famous people were the ones who knew the Bible amazingly well and traveled around talking about it.

Jesus – He was the best of the best. He was the All Star of all stars when it came to explaining Scripture. Some Jewish historians (not believers) who study the 1st century and Rabbinical studies call Jesus “brilliant.” His knowledge of Scripture, His understanding of Torah and God’s desire for His people in living out His Torah, Jesus’ answers to questions, His teachings are genius. But He’s the Torah in flesh, He is God – would we expect Him to be anything else.

Sadly today Christians often miss Jesus’ brilliance and depth of insight bc we do not know the Old Testament very well and we do not know their culture at all. Oh to see and hear the way the Jews of the 1st century did! To be able to listen to Jesus’ words and be amazed at His teachings. Hopefully the more we learn the more we will realize the absolute creative brilliant-ness of our Jewish Rabbi and Lord.