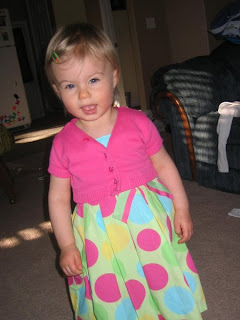 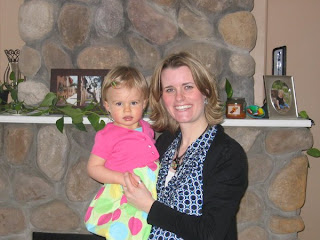 I know, we still haven’t taken a family pic yet. Whoops 🙂 Well, you can’t really see the changes in my belly (yes, I definitely am showing) but you can tell by the change in my face. I always think my face looks round but when I’m pregnant, well, let’s just say my tummy isn’t the only thing that rounds out. Rina in her Easter dress – isn’t she adorable 🙂

———————————
The four cups – if you’re not sure to what I’m referring read the last post 🙂 There is evidence that this tradition has been around for over two thousand years. In other words, Jesus Himself would have celebrated Passover by drinking these four cups – being the good Jewish boy that He was 🙂
The first cup is called The Cup of Sanctification. It is drunk at the very beginning of the Seder. It helps to sanctify/set apart the day, the meal, and the one who drinks it. The names also have a lot to do with the specific phrase that it’s referring to from Exodus 6:6-7. I will bring you out from under the Egyptians.
The second cup is called The Cup of Deliverance and commemorates Israel’s deliverance from Egypt. It is drunk after the telling of the Exodus account.
The third cup is called the Cup of Redemption and celebrates God’s redemption of Israel and recalls His specific statement – I will redeem you with an outstretched arm. This is taken after the meal. Here’s where things get interesting for the Christian. You are suppose to drink wine (or grape juice) bc the redness of the drink reminds the drinker of the blood that was shed by the passover lamb and even by all the sacrifices that were shed. It is thought by some (myself included) that this is the cup Jesus was referring to when He said “this cup is MY blood shed for the forgiveness of sins.” The cup of redemption.
The fourth cup is the Cup of praise to exalt God for His salvation from Egypt/sin and His taking Israel/us to be His own people. Again for the Christian this gets interesting. Some believe (myself included) that this was the cup Jesus was referring to when He told His disciples “you drink from it but I will drink from it again until I drink it anew with you in My Father’s Kingdom.” Jesus knew that before He could drink from the cup of Praise of God’s salvation acts in history He must drink from the cup of God’s wrath that would be poured out on calvary.
Hope this gives a little insight the next time you take Communion 🙂
-Names of cups can very slightly from book to book but taken in same places and mean same thing.