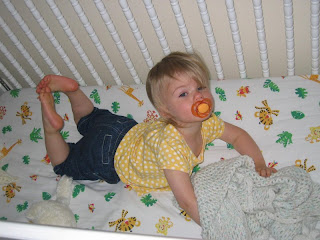 crib. If I remember correctly Rin had actually been awake for a few minutes but was refusing to get out of the crib bc she didn’t want to let go of her paci 🙂 I finally tempted her with food and she gave up the mouth piece 🙂
————————————————
I once heard it stated “the Lord is on the side of the poor. So if you want to be on God’s side be on the side of the poor.” To be honest, that statement really bothered me. Partially bc our view of “the poor” can be different than the OT view of poor in my opinion (those who are truly unable to take care of themselves vrs those who seem more unwilling). But also bc I always wondered is God really on anyone’s side vrs someone else?
There’s a passage in Joshua that has always made me smile. It’s found in Joshua 5, it’s right before the fall of Jericho by God through Israel. Joshua is walking around the wall of Jericho and he sees a man with a drawn sword. Bravely and pointedly Joshua walks up to the man and asks him – “are you for us or for our enemies?” The man’s response? “Neither… but as commander of the LORD’s army I have now come.” and Joshua hits the deck.
I’ve always found the man’s response interesting and even slightly humorous but I think I finally am beginning to understand it. In essence I think he’s saying this, “Joshua, I’m not on your side. But I’m not on their side. I’m on the LORD’s side. Now you tell me, Joshua, who’s side are you on?”
You would think that if God was on anyone’s side it was Israel’s. In fact, the very next week God shows Himself as fighting for Israel and Jericho collapses. So why does the man respond the way he does?
I think bc God wasn’t ON Israel’s side, however, God had chosen Israel to be on HIS side. Big difference. The issue isn’t is God for Israel or for Jericho, just as the issue isn’t is God for me or for Joe-blow down the street. (it’s not about “us.”) The question that should be asked is – am I choosing to place myself on God’s side, i.e. obey Him, get to know Him, acknowledge Him as Lord, Savior, God…
So when an enemy came against Israel, God fought the enemy bc they in essence were now fighting against Him. If you’re in God’s army when someone chooses to fight against you they are also choosing to fight against your commanding officer – God.
I think the old hymn got it right and we are now getting it wrong. The question we need to begin asking and answering is “who is on the Lord’s side? Savior, we are thine…”