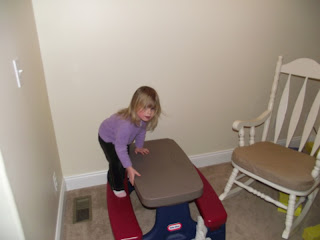 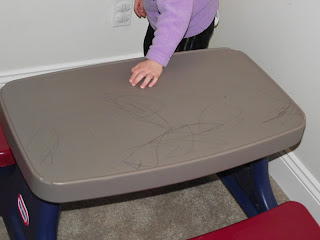 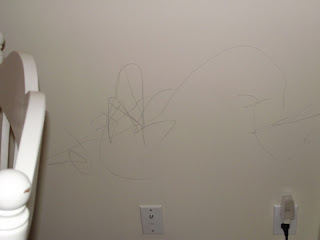 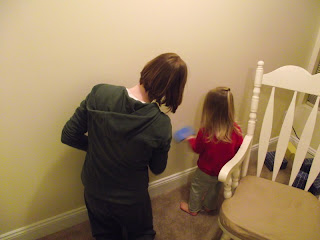 Oh yes, I have joined the ranks of motherhood nation wide. Rina has officially colored on her walls. Or shall I say, all over her walls, kitchen set, a nice wood chair, her dresser, and her play table. How did this happen you ask? Oh, let me tell you.
Apparently one night while she was in her room (winding down for sleep) Rina happened across a broken piece of a black crayon. The crayons are all suppose to be put away in a bag in a drawer when she is done coloring for several reasons. However, one day we missed one, a part of one that is.
Babies and Toddlers have eyes like hawks and they can find the most minuscule item on the carpet if they are interested enough. They must have built in radars as well. So, one night I went in to Rina’s room to turn off her nightlight and gaze at my angelic little girl as she lay peacefully sleeping. My joy turned to surprise and then horror as right above the nightlight I noticed a mark or two on the wall. I gasped loudly waking not only Rina but bringing Bryan running in to the room.
It was true, my little angel had shown her artistic capabilities all over her walls. (the first pic shows the two walls on which she drew) The early morning light the next day revealed that not only the walls but some items in her room also shared the same fate. All I could do was sigh.
FYI – magic eraser works wonders!