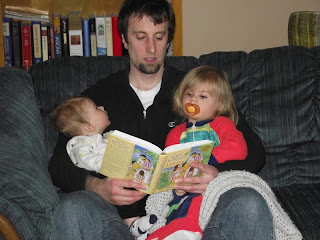 Bryan reading “Bible stories” to the kids. I love how Micah is looking so intently at Bry. What’s he saying??? is what his look says to me 🙂

We are doing well. Rina is pretty much over the strep – thank You Lord! Her rash is the only thing we’re dealing with now and that should get better. None of the rest of us got sick for which I am very very thankful, especially for Micah. I never think about how much close contact they have until Rin gets sick… then I worry.
——————————————————–
I’ve been thinking lately about the statement “well, at least _________ is in church.” I’ve said that about people myself actually. It’s usually said about a person who may or may not be a believer and who may or may not even be paying attention once they’re in the building. But, at least they’re “in church.”
Now, definitely for some people in the beginning this is a miracle in and of itself and I do not want to ignore that. And yes, definitely in Church at least the person hears the Word of God and that is a great thing as well.
However, I wonder IF the person never moves beyond the “at least in church” then does the being in church really do any good? It seems to me that it’s like saying “I want to be healthy so I’m going to go hang out in a gym. I may not be working out but being in the gym should do something for me right?!” We’d say wrong! You have to participate, you have to do something, get involved! Or all you’re doing is wasting time.
Maybe, just maybe it’s the same thing for being “in church.” Once you’ve gotten past the front door and you’ve sat in the pew for awhile, maybe it’s time to participate. During the times of singing picture yourself before the throne of God. During the times of prayer why don’t you pray as well? During the sermon – actively listen, take notes, look up the passages, write down thoughts and questions. Does being in church really count if all you’re doing is entering the building physically but not there emotionally or mentally? Maybe all it’s doing is giving people a false sense of security.
I wonder how many people sitting in the pew on Sunday could one day hear Jesus say “I never knew you, away from Me.”