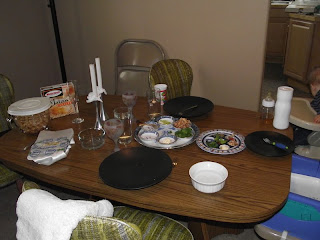 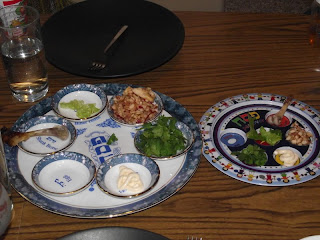 This Thursday we celebrated Passover. It was our first time doing it just as a family. Normally Bryan and I host for group of just adults so we knew this would be quite different with just the two of us and Rina and Micah. Children add a whole new element to the experience. They make it harder and better.

This was the fastest Passover we have ever done. We didn’t want to presume on Rina’s ability to sit and listen or even her contentedness at playing by herself for quite awhile. Normally Passover takes around 3 hours for us. This year it was an hour and half. And actually Rina hung in there for the first hour. Micah was sitting in his high chair for awhile but then moved to my lap and was content.
Having Rina there was just neat. She was sooo excited about all the new things. We lit candles and sang “this little light of mine.” She wanted to taste everything we did and drink when we did 🙂 She was very excited to find the hidden Matza (the Afikomen) and to look out the door to see if Elijah had come. Seeing her excitement and wonder at the whole event made it more enjoyable and just fun. After dinner we listened to some fun Passover music and danced which was also a big hit.
But it was also difficult – this was definitely the least reflective Passover we’ve ever had. My attention was more often on the kids and making sure they were ok than anything else. Then there was the HUGE mess in my kitchen from all the cooking. I understand why God decreed no work on the festival days. I too often wanted to leave the festivities and just clean up. It made it difficult to concentrate at times as well knowing what was coming next.
I look forward to a Passover celebration again with just adults so I can have a more reflective/relaxing time. HOWEVER, I look forward to celebrating with my children more and more as they get older as well. The innocence and excitement they bring adds so much 🙂
As for the pics – we have our Passover plate from Israel. And then a friend found some children’s Passover plates at a store so she bought several for us 🙂
Oh, we’re missing something on the Passover plates. I forgot about them until right before so they were cooking. Any guesses as to what’s missing?