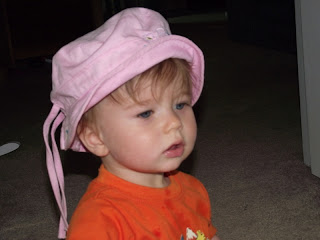 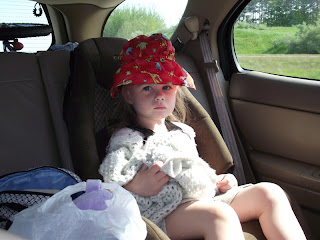 Rina is wearing Micah’s hat (backwards) and Micah is wearing Rina’s hat (a bit sidewards). No, I did not put either one on them. A certain little girl decided the hats were to be worn and who was to wear them 🙂

The big news in our life right now – we are potty training!!!!!!!!!!!! Rina is slowly coming on board. I know, I know, you’re not supposed to start till they are ready but Rin’s bottom has had a non-stop rash for 6 mos and I am sooooooooo done with it. Actually, Rina’s doing better than I thought she would (thank You Lord). She knows when she has to pee and runs to her little toilet without any help from me. She still fills her diaper when I finally put it on her so I know she’s holding a lot back but it’s a start 🙂 Micah came down with Roseola (sp?) – it’s a fever followed by a rash but he is doing much better, thank the Lord.
——————————————-
What is the difference between faith and belief? People use those two words interchangeably and they are similar but there is a very important difference.
In the Jewish mindset it is possible to have belief without faith but not faith without belief. You see, belief is just that -belief in something. But faith is more than that. In the Bible, whenever you see the word “faith” you need to read Action Plus Belief. You need both components to have faith.
Bryan loves to use this example – you may BELIEVE you can fly but until you jump off the roof without a parachute you do not have FAITH that you can fly. For true faith you need ACTION and BELIEF.
Many people will tell you they BELIEVE in God and even in Jesus and probably do. However, if there is no action accompanying that belief there is no faith in God. The writers of Scripture never intended faith to be seen as something that was just a mental exercise. James in his book makes this very clear – Faith w/o works is dead (i.e. not faith). This definition could also inform the way we read certain verses like “the righteous man will live by faith”…. maybe our actions are more important than we think…