A Man of Sorrows 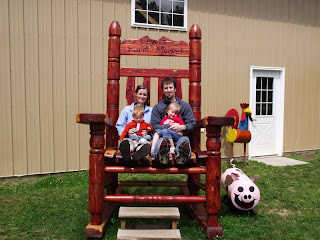 Our little family. Say it with me now… awwww 🙂 The potty training is not happening. Rina can do it, she’s shown that several times but she’s just not interested which is very frustrating but what can you do. My older sister and her kids come to town in about 2 weeks (yay!!!!!!!) and I’m not sure much potty training is going to be happening while they’re home so…. now we’re looking at the fall. Grrr.

Micah has a new tooth!!!! He now has 3 teeth, the 2 bottom middle ones and an upper side one. He could look very interesting depending on which teeth come next 🙂 He’s starting to try to crawl!!!! He moves from a seated position to the crawling position…. and then falls flat on his face… sigh.. but it will happen one day – I have hope!
————————————————–
This world is a hard place in which to live. Recently I was talking to a friend who reminded me that there truly is nothing new under the sun. This friend loves history and was reading about the old city/state of Sparta. Apparently in Sparta there was a mandatory death sentence on any child that was not thought beautiful enough to live or any child that had a defect. After the baby was born your had to throw the child out and let it die. Obviously the number of infant deaths was enormous!
Well, we may not throw our babies out for being ugly but we definitely have our “beautiful people” and “not beautiful people.” Every teenager (and anyone who has ever been a teenager) knows what it means to not measure up, to be judged and found wanting. We’ve all been there – a moment when we realized we were lacking something and therefore, less important bc of it.
This world will look many of us in the face and could care less if we live or die. We are not rich or powerful. We are not famous and some of us have even been told we are nothing and feel incredibly alone.
I was struck one day by Is 53. When talking about Jesus it says “He was despised and rejected by men. A man of sorrows and familiar with suffering. Like one from whom men hide their faces, He was despised and we esteemed Him not… we considered Him stricken by God, smitten by Him and afflicted.” Do you realize Jesus understands exactly what it is to be rejected by people! To have someone tell you that your not fit to live anymore, that you are worthless. Do you realize that God understands your pain. He’s been there, done that and in ways you and I can’t even fathom.
And not only does He understand the depth of your hurt, He is able to look straight in to the deep places of your soul and pronounces you worthy, beautiful (or handsome), priceless, important, lovely. He is the only One who loves the unlovely, who only and always creates that which is good, who understands our pain and heals our wounds. He is God.