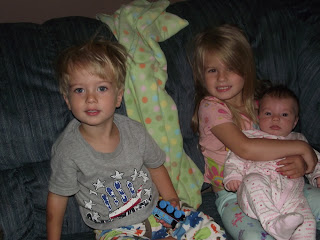 What can I say – I just love ’em. Sometimes it’s liking them that’s the issue 🙂 Yes, I am a very imperfect and flawed mom. The more kids I have and the longer I have kids the more I realize how imperfect I am.

The kids are doing well. Ali’s following the other 2 and becoming Long and somewhat lean 🙂 She has the sweetest smile and usually sleeps great at night for me 🙂 It’s just sometimes getting her to bed that’s the hard part…

My father-in-law started chemo last week. He goes back in on Monday for his second treatment. He is doing better than we had hoped but it’s still not easy. Your continued prayers are greatly appreciated!!! Bry’s brother and his family are coming in to town next weekend and we are very excited to see them 🙂

Otherwise, life cont’s on……. I’m learning with 3 it’s just mass chaos at times and that’s ok. Give myself 6 mos and then routine will come back. However, this past weekend I was talking to a mother of 7 who admitted that at 6 mos after her 7th was born she called another friend who has 9 kids to ask about life returning to normal. The mother of 9 said she gives herself a full year after each child’s born to let life resume “normal.” But they have 7 and 9 kids, I only have 3 – this should happen faster right???????