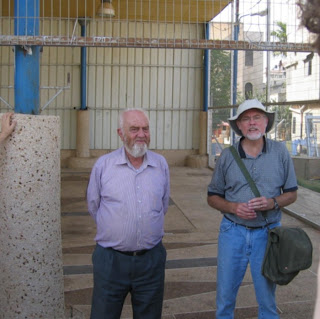 I don’t remember if I ever wrote on this before so – if I have, well who doesn’t need to have reviews right 🙂

Samaria is in the central part of Israel. The exact dimensions have changed over time. In the OT Samaria could refer to the capital city of the Northern kingdom or it could refer to the Northern kingdom itself. In the NT times Samaria refers to a small central location where the Samaritans lived. It’s more a ‘region’ than an actual ‘nation.’ The first picture is of the Samaritan high Priest (on the left) and my Prof Dr. Wright at JUC. The second picture is where the Samaritans sacrifice for Passover each year.

Quick history lesson – After Solomon’s death the kingdom of Israel split in two about 930-920 BC. There were then the northern and southern kingdoms. The capital Jerusalem and hence the Temple were in the Southern kingdom of Judah. The northern kingdom created its own capital(s) and even built its own religious sites. The northern kingdom (for several reasons) never spiritually did well and in 722/721 BC they were conquered by the Assyrians, a much bigger nation than Israel. If Israel was a ‘mouse’ Assyria would be a ‘cat.’

As Assyria went around gobbling up all these smaller nations they began to be spread thin and revolts could and would often occur. So they way they (and others) stopped revolts was by deporting the main people of the smaller nation (remember Daniel and Ezekiel were taken to Babylon before Jerusalem fell along with other important people) and moving them to either their own nation or to another small nation. The thought was -if the only people left in the land were poor simple farmers and traders who’s going to lead a revolt? Without the leaders pushing and leading the people to rebel there would be no rebellion. A poor farmer is going to be more concerned with making sure he and his family survive than who’s in control now. And for the most part they were right. The Assyrians would then bring to that small nation, in this case the northern kingdom of Israel, their own people or people from other small nations. They’d mix the populations so there could be no nationalistic feeling. Does this make sense? It didn’t foster a revolt but it did foster hatred for the Assryians.

Does all this make sense? So you have the southern kingdom of Israelites refusing to intermary and divorcing their gentile spouses if they had intermarried rebuilding the Temple to the LORD God of Israel. But, there’s another group interested in this Temple as well… (stay tuned)

(You can read most of this in 2 Kings, Ezra, and Nehemiah but I’ll be filling in some gaps that occur. You see, the Biblical authors assumed we already knew this, their readers at the time did)