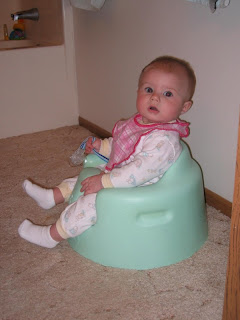 Enjoy the picture bc you will not see this often if you actually come visit. Rina is not the biggest fan of her bumbo seat. She does not like the lack of freedom in moving her legs around. Nor does she love the sitting position too long. She keeps trying to straighten her legs out and stand up I think when we put her in it. Oh well, maybe the next child will like it better. (NO I am NOT pregnant)

The big news at the VanHaitsma household the past couple weeks is – Rina rolled!!! On her first day rolling I was able to get her to role over 4 times! She has not continued the trend, though, and since that day I think she’s rolled over 3x (and it’s been about 2 weeks now). I was so excited and clapping so loudly that Bryan heard me and came out of his office so he was able to see a role too.

The other big event was realizing Rina’s bottom two teeth are coming in!!! Last Friday we felt one but then yesterday when I was poking around inside her mouth (trying to see the tooth like a good mom) I realized there were two spots of white coming up. It’s exciting but I’m not sure what Rina will look like with teeth. I kind of think her mouth is cuter without them. Definitely more nursing friendly…

In other news we made an offer on a house and it was accepted. Now we’re just finalizing details and getting an appraiser…. Phew, it’s a TON of work but wow has God blessed us in huge ways. (more on that later)