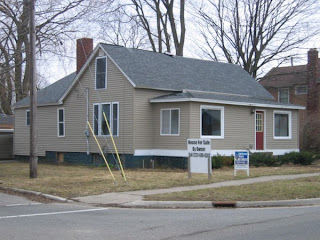 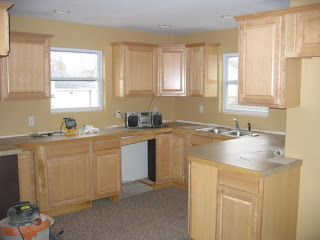 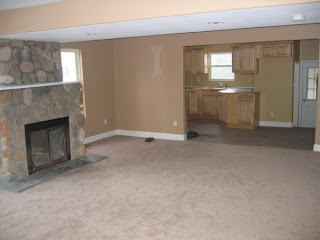 Apparently, Jess, now is the time for buying houses 🙂 Congratulations on your first new home as well!

Well, here it is – our new home (Lord-willing, we still have to close on it but I’m not too concerned about that). There is so much to say about it, but I’ll try to keep it brief. Quick history – the house was built in the late 1800’s we believe and has been added on to since then. About 2 years ago there was an electrical fire and the inside of the house had to be completely gutted and redone. Even some walls were rebuilt or removed.

I love everything about the house – except for the location. It took me quite awhile to get over that. See, the house isn’t in Ludington, it’s in Scottville. Scottville is about 10 minutes east of downtown Ludington. Incredibly far I know 🙂 Plus, the house is on a main street in Scottville. I was not thrilled about raising kids even for a few years on a main street. BUT, the backyard is partly fenced in (a good safe place to contain the kiddos when they’re little) and the cars are only going about 25 mph so it could be much worse.

If location is so big then why did we decide on this house and not keep looking? BC God made it obvious this was the house. Before we even started house searching Bryan and I sat down and wrote out 3 lists. The first were things that were absolutely necessary in the house. The second – things we’d really like to have and the third list – extra stuff that would be nice but totally not necessary. We had only two things on the necessities list: 1)internet abilities and 2)a place for an office for Bryan. EVERYTHING else would be bonus. We had already been praying for wisdom and that God would make it obvious which house we were suppose to buy.

We actually looked at 17 houses and there were numerous others that we saw pics of or drove by but turned down for different reasons. The house we’re buying wasn’t even in the running bc it was being sold by it’s owner so it wasn’t in the MLS system. Our realtor knows the owner personally, remembered the house and decided to show it to us one day spur of the moment. The inside of the house already looks incredibly nice but after what we had been seeing in the other houses – this one looked amazing. I was definitely interested but couldn’t get over the location. So, we kept looking around.

I talked to family members, friends, and my hubby. We prayed and and I agonized over it. I kept telling God – if you want us to have this house you need to change my heart, I need to know this is the one. One day while talking to my older sister on the phone about the house- describing how it was exactly what I wanted it hit me, “God gave me everything I asked for!” All the stuff on the other two lists were in this house. Stuff I had mentioned a couple of times to God saying “You know, it would really be nice to find a house with…..” but didn’t really think He’d say yes to.

Added to that – the owner of the house (also the guy who’s redoing it) goes to my parent’s church and is a good friend of the family. He has made this incredibly easy and once he found out we were interested told Bry and I to walk through the house and tell him things we’d like to see done. Plus he bought all the appliances for the house (which he let Bryan and I give the ok to) and after we had made our offer he decided to put a new roof on the house. Amazingly generous man who just wanted to bless us, and he has. Needless to say we’re getting really excited about moving into our new home and cannot believe how incredibly faithful God has been and how much He has blessed us through this.

As for the location- I finally asked God why Scottville and not Ludington? His response “you didn’t mention location.” Believe me, next time I will 🙂