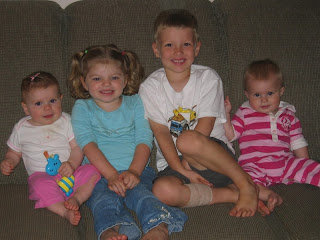 Bryan’s brother and his family were in town visiting from Connecticut last week. It was so good to see them and be able to spend time with the kids. They grow up so fast! It’s also fun bc their youngest is two days younger than Rina 🙂 We’re looking forward to watching the two girls grow up and hope they’ll be good friends. It was hard to see them go home on Sunday. The names are (in order L to R) Nora, Aliza, Eben, and Rina.

I do have a prayer request. My little sister, Jenna, is in Seattle dancing with a Christian dance Company called 6th Day Dance. She had a job and a home but now she is looking for both 🙁 Her nanny position was downsized from 2 kids to 1 and the place she was renting was put on the market to be sold. Anyway, if when you’re done reading this wouldn’t mind asking the Lord for wisdom, peace, and guidance for her I’d appreciate it 🙂
———————————–
What is the difference between faith and belief? Often today people are told “just believe in Jesus” and you’ll be saved bc faith and belief are seen as pretty much the same thing. Well, in the Jewish mindset (and therefore, the mindset of most of the authors of Scripture) faith and belief are two different things. In the mind of the Biblical authors – Faith = belief + action.

“What good is it, my brothers, if a man claims to have faith but has no deeds? Can such faith save him?… In the same way, faith by itself, if it is not accompanied by action, is dead. But someone will say, ‘you have faith; I have deeds.’ Show me your faith without deeds, and I will show you my faith by what I do.” James 2:14, 17-18