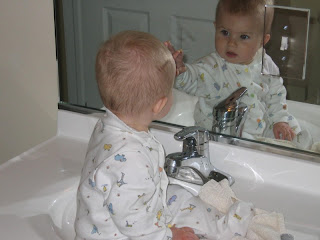 Rina is still adorable and we still just love her 🙂 She has 5 teeth in and we think another one is popping through!
————————————
Why do Christians bless the food before they eat it? Have you ever asked yourself that question? I never did till I read about where the tradition came from several years ago. It started with Jesus – go figure 🙂 In Mt. 14:19 the text reads in the Greek – “He blessed and breaking the loaves He gave to the people.” Now, the translations have added the word “the bread” behind the the first verb but apparently the Greek doesn’t really have that word there. Obviously the bread was broken and given to the people but was it the bread that was blessed as well? (same as in Mt 26:26 and Mk. 6:40)

Before the time of Jesus Jewish sages were meditating on the verse Deut 8:10 which states to bless God after drinking and eating your fill. They decided that if it was good to bless God after you ate His gift of food it would also be a good idea to bless God before you eat. And if it’s good to bless God for food why not bless God for EVERY gift He gives. So, they began creating blessings for every gift they could think of. And they have a blessing for everything! For seeing a pretty woman, seeing a sage, before reading Torah, when you wake up in the morning, when you see a rainbow, when it rains, when the sun shines, when you see a cloud, when you see a mountain, when something good happens or when something bad happens, when you go to the bathroom (bless God for the holes He gave you) and before you eat. There’s even a statement that a righteous person will say 100 blessings a day!

The blessings today start out “Blessed are You, Lord God, King of the Universe who….” but in the time of Jesus it was simply “Blessed is He (God) who…” Now, who or what did they bless? Not the item they saw but God who gave or created this thing. So, Jesus, being the good Jewish boy that He was more than likely was not blessing the food, but reciting the traditional Jewish blessing of God for the food He had provided. “Blessed is He who gives wheat from the field” or something to that effect.

The original Greek authors probably knew this Jewish tradition so felt no need to explain it. However, through the centuries as the Church has moved away from its Jewish roots this idea of blessing God for all of His gifts has been forgotten. The translators of the New Testament not knowing this tradition had no idea what Jesus blessed, and since the other two words obviously were for the food, apparently the blessing was as well. Is it bad to bless the food, no. It can’t hurt it. But why bless the food? Why not follow in Jesus’ footsteps and bless the God who gave you the food the next time you eat?