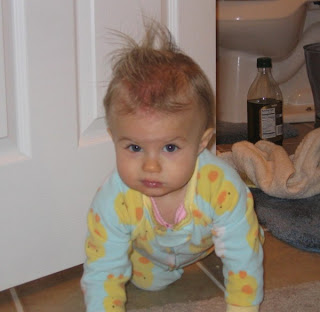 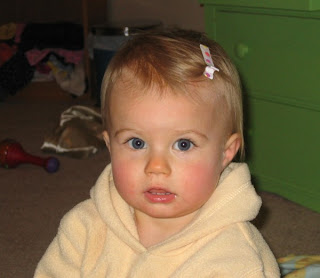 Oh the fun we can have with our children’s hair as parents 🙂 I told myself that I would NEVER put a barrette into Rina’s hair until it was long enough to need one. Well, I got tired of waiting and gave into my desire. Rina didn’t really notice it was in or seem to care but there just wasn’t enough hair to keep it in very long. Maybe in a year or two 🙂
——————–
God was incredibly faithful and my parents have moved back in to their home. Although they were a bit bummed about leaving the penthouse condo (!!!) they were staying in. Boy what a trial this turned out to be for them 🙂 From the beginning God was just overwhelming faithful. First that the mold was even found before my little sister moved back home and into her old bedroom (the home of the mold), then there were two men in the church who took it on themselves to do as much of the work that they could so my parents wouldn’t have to use and pay the “mold re-mediators” for every single thing. How quickly things were fixed and how well things were taken care of was another huge answer to prayer.

There’s only suppose to be about 200-300 mold spores (per??) to be livable according to the standard set today. My little sister’s room (when they tested the air) had 107,000 mold spores(!!!) and the rest of the house had 4500 and the numbers were growing. Hence the reason my parents were told to evacuate the house. The mold was found in the cement in my sister’s room. The mold re-mediator who came to work on the room was not sure he would be able to get it clean enough for livable standards. He was hoping he could get the mold spores in my sister’s room down to 1000.

After the cleaning and the drying the final test was done and it came back- 80 spores in the room!!!! Amazing results for which we are all incredibly thankful!!! Now they need to let the cement continue to dry, refinish the room, and move the stuff back into the house. Thank You Lord. God is faithful.