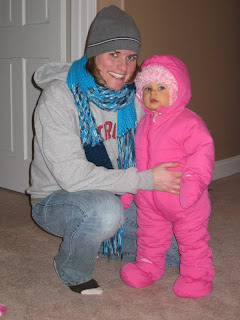 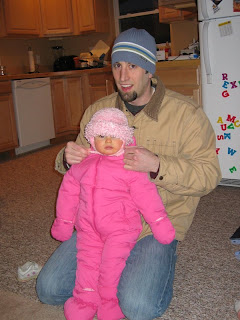 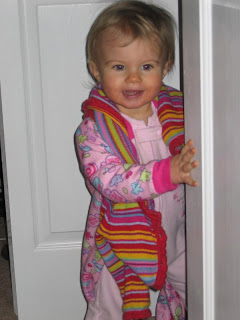 We try to go for a walk several times a week. Sometimes it happens sometimes it doesn’t. We’re better when it’s warmer. Rina gets all gussied up in her pink snow suit. It looks like the one she wore last winter only this ones a tad bigger. The third picture I just think is too adorable of her so I added it 🙂 One day she found a couple of my scarves in the closet and decided to add them to her wardrobe. After a day or two of that the scarves became “so yesterday” as she moved on to bigger and better things. Any piece of clothing Rina found she began putting on, hence the sweater over the pjs. That lasted a day or two. She hasn’t done that for awhile but tonight she was back in my drawers putting my shirts around her neck again. Too cute 🙂
In other news I’m doing well. Still tired but as a friend reminded me today I am 2 years older than I was when I was pregnant with Rina so that has to be doing something 🙂