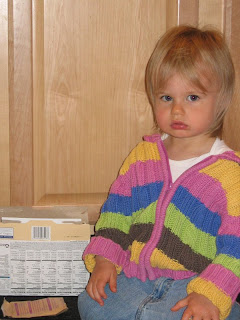 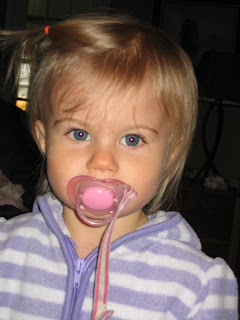 Rina’s hair is growing out!!!!!!! I love the way it looks. It’s similar to Bryan’s hair in that it can have a wave at the bottom of it. No, I didn’t do her hair. Rina had a babysitter one day who decided to be all girly and painted her nails and did her hair. It was cute but she doesn’t have enough hair to keep things in.
—————————————-
So, who or what saved Israel and when? Well, let’s look at Scripture. Exodus 15:2 states ” The LORD is my strength and my song. He has BECOME my SALVATION…” (emphasis mine) Verse 16 goes on to say “… Until Your people pass by, Oh LORD, until the people YOU BOUGHT pass by.” (emphasis mine) Lastly, Is 51:10 states “Was it not You… who made a road in the depths of the sea so that the REDEEMED might cross over?” (emphasis mine)
The first two verses are in the context of the song that Moses and the children of Israel sang after crossing through the sea. The last is from Isaiah referencing the children of Israel crossing through the Sea. These are not the only references that describe the children of Israel being redeemed at this point-fyi. The Exodus event is THE EVENT in the OT. In fact, it has been called by some scholars “the model or paradigm for salvation throughout all of Scripture” for very good reason that I won’t take the time to get in to.
In other words, the Exodus event, the crossing of the Sea and entering into Covenant* with God at Sinai is the salvation event for Israel in the OT. Read the Exodus account – Israel does nothing to earn God’s help. They don’t even cry out to Him! They are in slavery to Pharaoh – a horrible taskmaster who’s main purpose is to use and destroy them. There is absolutely nothing they can do to remove themselves from slavery to Egpyt. God intervenes and pulls them out of the kingdom of Egypt “baptizes them” through the crossing of the sea and enters into Covenant with them, essentially telling them – “You are now My people and I am now Your God. You are no longer under Pharaoh’s authority, you are under Mine. We are in a covenantal relationship now.”
Look familiar?
And ALL of this was done before Israel had done anything to earn God’s help/salvation. Read Deut. chapters 11 and 30. Repeatedly Moses tells Israel “you didn’t do anything to earn God’s salvation and you aren’t anything that should earn God’s salvation!”
God entered into Covenant with Israel BEFORE they had “the Law.” God saved Israel from Egypt BEFORE they had the “Law.” God brought Israel through the sea BEFORE they had the “Law.” So, who saved Israel – God did. When – at the Exodus event and it culminated in the making of the Mosaic Covenant on Mt Sinai. The “Law” had nothing to do with Israel’s being saved and therefore, could not un-save Israel. Does all this make sense????
So, why did God give Israel the “Law?”
————–
*A Covenant is like but firmer than a binding oath or a solemn agreement. You do not break covenants bc the penalty of breaking them can be death. Marriage use to be called the “marriage covenant” and that was acknowledged by the phrase “till death do us part” bc nothing else is suppose to or allowed to break a covenant.