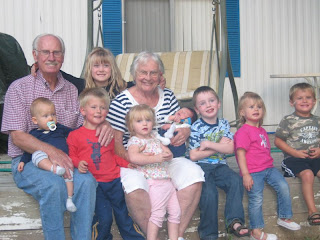 This is a picture of my grandparents and all their great grandkids. We took another picture a couple of weeks before this one but Micah wasn’t available at the time so everyone decided we needed to take another and include him. I can’t believe they’re basically all smiling!

Have you ever wondered about the word “amen?” Where did it come from and why do Christians say it?

This world would have you believe that truth really doesn’t matter bc there really is no such thing as truth anyway. But God’s Word says differently. Ps. 31:5 states that the Lord, Yhwh is “the God of truth,” and in John 4 Jesus says that the kind of worshipers God desires are those who “worship in spirit and in truth,” and He even goes on to claim that He is the Truth (Jn 14:6). There are many other Scriptures that speak of “truth” as if it actually exists. As believers today we stand against the kingdom of this world and proclaim “truth really does exist and we know Him by Name, Jesus the Christ, the Son of the Living God who’s Name is Yahweh.”

Have you ever thought about how that is a wonderful and amazing thing to be able to say? In the midst of a world and a culture where values are constantly changing, rules and laws are getting made and broken daily, where what was bad yesterday is good today and what was acceptable to say and wear last year is no longer, how good is it to truly know that there is a God who does not change, who’s Word is eternal and who’s truth is from everlasting to everlasting. In the midst of a world that’s constantly pushing and pulling – you can know that you stand on solid ground when you are standing on the word of God. No wonder Jesus also said “if you hold to MY teachings then you are really my disciples and Then you will KNOW the TRUTH and the truth will set you free.” (Jn 8:30-31)